I arrived in Buenos Aires 56.5 hours after leaving the distant Ushuaia. From the 15°C of the southernmost city in the world, I got off the bus and found 25 in the Argentine capital city. 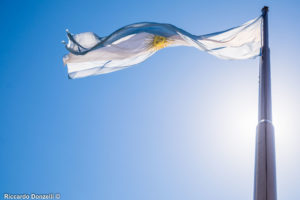 The huge Retiro station (more than seventy bus docks) is located in a neighbourhood a few kilometres north of the centre, surrounded by a terrible favelas: tinplate or asbestos roofs, mud, puddles, rusty poles, dangling cellophane, shopping carts containing cathode ray tube televisions and other junk, toxic or alcoholic people sitting on the floor in the middle of it all, including children. Not a nice impact.

I bought a rechargeable SUBE card (25 pesos) in a kiosk at the station, and with this I could use the bus and the subway during all my stay in the city.

It started to rain violently, and the metro took me to the Indipendencia stop, about ten minutes walk from the hostel I had booked.

It rained all day, so I went out exclusively to do the shopping and get wet even in my shoes. However, I had a week to spend in the city before heading to the Iguazu Falls.

The following day I began to scout out of BA from the colourful barrio (neighborhood) of La Boca, a half-hour bus ride from the centre, to the south.

The district – founded in 1876 by Genoese immigrants – is famous for its “Caminito“, a long pedestrian street surrounded by colourful souvenir shops and restaurants for tourists, and for the Bombonera stadium, which literally stands in the middle of the neighbourhood, surrounded by houses and other buildings. One of the two football teams from Buenos – Boca Juniors, which takes its name from the neighbourhood – has its headquarters in that stadium. The bright colours of the houses derive from the ancient custom of painting the facades with the leftovers of the paintings used for the boats, which furrowed the adjacent Riachuelo river.

From that day on, the sun never left me during all my Argentine days, and the temperature remained constant around 30°C. 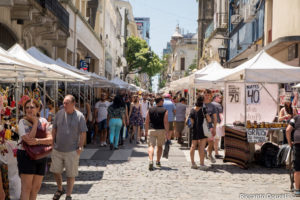 After lunch I returned to the centre and walked along Avenida 9 de Julio, considered the widest road in the world, with a width of 140 m and I do not know how many lanes. The main street of Buenos Aires starts from the huge Constituciòn train station, and goes well beyond the famous Obelisco, one of the city’s main attractions: 63 m high and completely built in concrete, in 1936.

At the foot of the Obelisk it is usual to come across popular protests of every kind – almost daily – such as the weekly one for the infamous story of the Desaparecidos.

In the following days I did browse the districts of Palermo and Recoleta. The first one, with wide tree-lined avenues, fenced parks, and palaces built between the nineteenth and twentieth centuries, reminded me a lot of Milan, and some of its avenues and ring roads. There was very little to visit though: a botanical garden, a street with graffiti, and little else. The highlight of Palermo are the shops, restaurants, and other trendy (and expensive) places. It is probably the best barrio in which to live, the most elegant, but as a simple visitor I was not particularly struck by it.

Near Recoleta there is instead a large and majestic cemetery, containing also the family crypt where Evita Peròn (wife of the president Perón and Argentine loved & hated heroine) rests.

The highlight of Buenos Aires, in my opinion, was undoubtedly the San Telmo Sunday markets. The weekly appointment is concentrated in a long street, which starts from the centre of the homonymous district of San Telmo, and it ends in the wide Plaza de Mayo. In the market you can find clothes, mate and bombillas (to drink the infusion of mate herb), leather and wooden crafts, knives, games, and any other kind of objects: from those used, vintage, to those more recent and handmade, even on site. There is also excellent street food; from burgers to empanadas, to crepes and other local delights.

In the small Plaza Dorrego – where the market begins – every Sunday morning you can also attend interesting tango performances, the national dance.

In the Plaza de Mayo, however, you can visit the Casa Rosada (the residence from which Evita made his famous speech), and the Metropolitan Cathedral.

Also in the Microcentro (the most central neighbourhood) of Buenos Aires there are theatres (above all the beautiful theatre Colòn), the Palace of the Congress in its beautiful square, and dozens of impressive buildings in Italian style.

After an enjoyable week in the city I took the umpteenth bus, this time to go to the north, to Puerto Iguazu (about 20 hours). The city is located right on the border with Brazil – and very close to the one with Paraguay – and it’s famous exclusively because of one of the most impressive natural spectacles of the entire planet: the Iguazu Falls.

The waterfalls derived from the homonymous river, which at that point marks the border between Argentina and Brazil (which has its own version of the Park, on its side), are among the most impressive in the world: you can count 275 falls, for a total width of 2.7 km, a maximum height of 82 m, and an average flow of 1,756 cubic meters of water per second (!).

The National Park is very crowded, with long queues for access to the park itself and to the useful internal trains. I found the management of the crowd very bad and idiotic, and my mood was regenerated only thanks to Mother Nature, once again.

In the Park you can also come across numerous animals such as iguanas, monkeys, huge spiders and cute coatis.

I left the town and its tropical climate the following day, when I took another sleeping bus (the last one) that brought me back to Buenos Aires, where I spent the last two days enjoying food and buying souvenirs.

My trip in South America ended on December 31st, with the flight that brought me back to Milan after 435 days of travel (of which 361 in New Zealand and 74 in South America).

Click here to see all my pictures from Argentina!

…to the next Travel Diary.