After crossing the border between Chile and Argentina, the first destination was San Carlos de Bariloche (or more simply Bariloche), a tourist town on the shores of Lake Nahuel Huapi.

After the bus from Chile left me in the city, at 9 pm, I took a taxi and headed to my hostel. I stayed there for two days, walking around the beautiful lakeside town, which appeared very modern and western to me, especially after seeing Peru and Bolivia.

During those two days I agreed with the English girl “C.” – known in the Salar de Uyuni in Bolivia – who was bored in Buenos Aires and decided to join me in El Chalten, my next stop.

El Chaltén was exactly 24 hours by bus from Bariloche, a road that I’ve travelled on two different buses, and that cost me as an organ, but I knew Patagonia would have been expensive.

So I discovered that, despite the financial crisis in Argentina – which had halved the value of Peso in the last twelve months –, the long bus journeys would have been an economic bleeding, in the following weeks.

When I reached El Chaltén at 7 in the morning, I managed to check-in at a hostel near the bus terminal, and, after having rejoined with C., at 9 o’clock we were already on our way to a nearby lagoon.

El Chaltèn, in fact, is considered the Argentine capital of trekking, as Puerto Natales (a few hundred kilometers away) is for Chile.

The first day we reached the Laguna Torre, after a trek of about 10 km (3.5 hours one way). The landscapes were absurd, like alive postcards, and the peaks of the Cerro Torre and the nearby mountains stood out against the background with their famous gothic cathedral spikes. Arrived at the Lagoon (punctuated by icebergs), unfortunately, the clouds also arrived, hiding the peaks.

On the way back, I drank water directly from a stream for the first time in my life, after filling the bottle. We already knew about the Patagonian pristine environment, where even the rangers encourage to fill bottles directly from the waterfalls, keeping in mind only to climb up a dozen meters from the paths, before doing so. It was banally splendid.

After the evening in the beautiful mountain town (packed with tourists and mountaineers from all over the world), the following day we left for the second trek. This time we would have reached the highlight of the Argentine trekking: the Laguna de Los Tres, at the foot of Mount Fitz Roy.

C. had the back of both heels dug by blisters, curled up and covered as best we could, and I perceived in my lower limb joints an age closer to seventy than thirty.

Despite these we managed to conclude this trek. The last hour, discouraged by a sign for those with physical problems, was exhausting. With the uphill trail formed by slippery rocks and huge stones, that we covered in an hour.

Once we passed the last stony ridge, however, we forgot the fatigue instantly. The strong wind froze the sweat on my back, trapped by the raincoat, but eventually we sat behind a rock for lunch, happily admiring what – to date – is undoubtedly the most beautiful mountainous panorama that I have seen.

Back in the city, and destroyed by trekking, we decided to give us food – and alcohol – in one of the many restaurants of El Chaltén, and after the fatigue of those two days we enjoyed completely.

The next day, a 3-hour bus trip took us to El Calafate, a town known above all for access to the Los Glaciares National Park, and to the famous Perito Moreno glacier.

On the second day we went directly to the glacier tour, with a minibus and a guide who picked up people from the various hostels in El Calafate.

The guide, very prepared and bilingual, explained that, thanks to the particular shape of the continent, the air currents coming from the Pacific Ocean constantly hit the Andes which, due to altitude and latitude, go to form numerous glaciers. In Patagonia there are about three hundred glaciers on the Argentine side and three hundred on the Chilean one.

The Perito Moreno is one of these and, incredibly, it is not even the biggest one.

The reasons that make it so famous are two: 1, it’s the most accessible one, as a paved road allows you to reach it in about two hours by car from El Calafate; 2, thanks to the daily snowfall on top of it – always because of the particular geographical area – is one of the few remaining glaciers in the world, which does not recede.

In fact, the amount of snow and ice that accumulates upstream, corresponds to about the same amount that is melted and lost downstream (about two meters per day).

When I arrived at the glacier, I was amazed. I had never seen so much ice all together before. The white and blue wall stood out from the lake and rose up to peaks of 70 m. 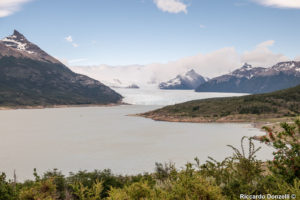 The stunning Perito Moreno on the background

Also the numbers of the Perito Moreno are impressive: the glacier covers an area of ​​250 square kilometres, and has a length of 30 km; the front of the glacier is about 5 km wide, and the maximum depth reaches 700 m.

The two-floors ferries packed with tourists, approaching up to a maximum of 300 m from the glacier, looked like tiny mosquitoes, trapped in a huge freezer compartment.

In about an hour and a half we walked the whole site from the comfortable and long wooden paths, positioned by the National Park in the middle of the forest, which is a few meters in front of the glacier (you can also take a cruise on the lake and/or walk on the glacier with the appropriate boots and a mountain guide. Paying more, of course).

After the third day in El Calafate, spent in the city with C., I reluctantly said goodbye to her to continue my journey south.

So I got back to Chile to continue the Patagonian treks, reaching Puerto Natales and the famous Parque Nacionàl Torres del Paine, which I have already mentioned here in the article dedicated to the Chilean Patagonia (click me). 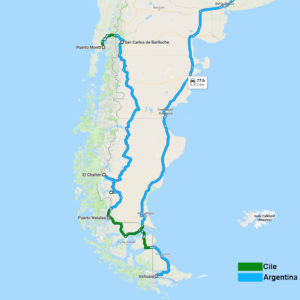 My trip in Patagonia, with the many changes of borders

After the last three days in Chile, I returned to the Argentine Patagonia. With a trip on three different buses, which lasted about 25 hours, I finally reached the main destination of my whole South American trip: Ushuaia. All on the road, without flights.

Ushuaia is famous for being “The southernmost city in the world“, or, if you want to be romantic as they are, “La fin del mundo” (The end of the world).

Located at the far south of Tierra del Fuego (a region that is part of Patagonia), it is also one of the favourite ports for cruises to the nearby Antarctica, which is only 1,000 km away.

I stayed in the city (a beautiful port town) only two days, not having time to get used to its summer sunsets, which took place between 22:30 and 23, or to do other trekking in the National Park of Tierra del Fuego. Maybe next time.

I left Ushuaia at 5 am (the dawn was already there), two days after arriving: with a series of three buses I would have reached Buenos Aires, for a total of 56.5 hours on the road.

When I asked for the availability of such a ticket to the agency in the city centre, the fat saleswoman looked at me over her glasses, to understand if I was a demented or not. 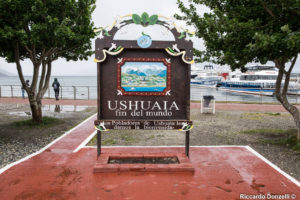 La fin del mundo – The end of the world

I did withdrawal the money and gave her about 4,700 Pesos, and she printed me the tickets, smiling.

After two and a half days on three buses – passing again and again for a few hours in Chile, because of the silly Patagonian borders –, during which nothing particular happened (they were comfortable sleeping buses, and after so many hours I became almost attached to my comfortable single seat), I finally arrived in the huge Argentine capital: Buenos Aires (of which I will speak in the next and last “Argentine” article).

Click here to see the entire photo gallery of Argentina.