My journey in the mystical Patagonia began, therefore, in Puerto Montt. The port city in southern Chile served me exclusively as an access point for the island of Chiloé.

The island is the largest in Chile and is famous for its wooden churches, which made it a UNESCO World Heritage Site in 2000, and dramatic landscapes. After a day in Puerto Montt – where there is nothing interesting to do or see – I then moved to Castro, the capital of the island above.

I stayed only one day, but it was enough to admire the famous coloured stilt houses, which are located near the shores, the beautiful wooden church of San Francisco and, finally, I could taste a delicious local salmon in a small restaurant in the centre of Castro. I still remember the incredible side sauce, and the tenderness of the fish. Back in Puerto Montt I heard that the house where I had spent the first night on AirBnb was occupied by other guests. Therefore the landlady – a very kind local girl who also spoke excellent English – allowed me to sleep for free on the comfortable couch.

So I turned AirBnb into Couchsurfing for that night.

The following day I went in a new Country again, with a bus that took me beyond the Argentine border, and more precisely to Bariloche.

Patagonia, in fact, is a large geographical region that includes the south of Chile and the south of Argentina.

In this article I will focus on the Chilean Patagonia, while the Argentine Patagonia will have another dedicated article. I remained in that part of Argentina for seven beautiful days, then returned to Chile and headed to Puerto Natales, for the best part of Chilean Patagonia: Torres del Paine.

Arrived in Puerto Natales I immediately settled in a shitty hostel (the least expensive I had found, which was not even that cheap), which I had previously booked.

The city was packed with backpackers and trekkers, since in the Torres del Paine park there is the most beautiful trekking route in South America. The small town overflowed with outdoor gear shops, and bearded, dirty and backpacked characters (like me).

So, Torres del Paine National Park (literally pronounced “paine”, as in Spanish) – placed by National Geographic in fifth position, in its ranking of the most beautiful places on the planet, and UNESCO Biosphere Reserve since 1978 – is located about 112 km from Puerto Natales, and it is vast.

So vast that the two trekking routes inside it last from four to nine days. My initial idea (many months before arriving in Chile) was to hike the very famous W trek.

This trek – which on a map is reminiscent of a W – lasting 4-5 days, would take me to the south of the park, allowing me to visit all the best parts. The other route, which is called O trek, is instead a 9-day circuit that involves the passage throughout all the National Park (including W).

First of all, you had to reserve campsites a few months in advance, as December/January is high season, over there, and places are limited every day. I did it in July, while I was still living in Auckland, and I could only book for four nights between the 2nd and 6th of January 2019. No other choice between December and mid-January was available.

Moreover, to book, there is not a simple website, but two. Because the campsites in the park – about ten – are managed by two different companies. Therefore you need to reserve seats with both sites open, to be sure to find space on the days chosen in the various points of the trek.

So I booked, and trying to spend as little as possible, however, I had to pay about 100 NZD for four nights. All excluded. In Puerto Natales, in fact, I also would have to rent a tent, a sleeping bag, a stove, cooking utensils, and buy food for five days.

When I reached Chile in November, I decided that I did not want to have any fixed dates in front of me – that forced me to be careful with the present – and, above all, by doing two counts I noticed that I would arrive in Puerto Natales before Christmas, and I would not have been able to stay two weeks waiting for the famous 2nd of January. I just could not afford it.

So I decided to take it easy and don’t do the W (I was also unsure about emptying my big backpack, leaving everything in a hostel, and filling it with the rented camping equipment. Also I was unsure about carrying twenty kg on my shoulders for five days, having never done it before).

When I arrived at P. Natales, I hired a car and headed for TDP and stayed there for two whole days. At night I slept in “my” grey sedan, and the first day I managed to do at least three treks in different points in the park, which I could easily reach thanks to the car. So I broke the time of the long W trek, and I could walk and admire places that the great trekking fans who crowd the Park don’t even see, being out of the way when walking the W. 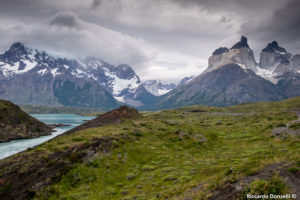 I saw the Grey Lake and its glacier, and walked in the most beautiful and dramatic place I have ever seen in my life, between Lake Pehoé and Lake Nordenskjöld, to get to a grassy place and admire the majestic “Cuernos del Paine” (Horns of the Paine).

For most of the time I was alone, almost everywhere I went, despite walkers, cars and buses, wandering around the Park like me.

Near a toilet (there are some recreational facilities and ranger stations in the Park) I saw three guys with huge backpacks hitchhiking. I stopped, I picked them up, and took them to a lagoon half an hour’s drive from there, where there was a bus stop from which they would return to Puerto Natales.

They were three Chilean funny guys from Santiago who had just finished their W in four days. I left them and I went on.

The following day was the big day.

I woke up early and drove to the parking lot near the Hotel Las Torres; from there I walked towards the last leg of the W trek, the most demanding, which finally leads to the three peaks of Torres del Paine, Towers of the Paine.

Ten minutes had not passed when it started to rain. A lot. Oh, I forgot to say that in Patagonia there is constantly a wind that moves you literally without problems, while standing or walking.

In less than five minutes I was completely wet and pissed off. So I went back to shelter under the porch of the Hotel. There was not a living soul around, and I doubted that I was the only one in Chile who did not know that that day would have been so rainy that it would not allow the walking.

This was until a couple of French arrived, who sheltered like me in the hotel lobby. It was 7:30 in the morning, and we had to wait until 8:30 to be able to try again.

As quickly as it arrived, the rain left, and the cool wind was so strong that it dried the asphalt and the path in a matter of minutes. Absurd. We set off, but I left them behind me, slow as they were, after a few hundred meters. And I walked, walked, and walked.

Patagonia is so untouched that it is normal, and even recommended, to stop to fill bottles directly from the river. Needless to say how fresh and perfect that water was.

The walk, not long, but quite hard, continued between sun and light drizzle. It was tiring, but when, at the end of a steep stony slope, I passed the last big rock and saw the Towers, well… I soon forgot the fatigue. 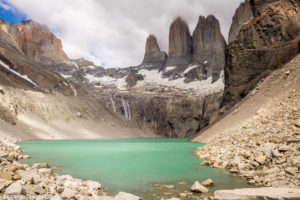 In front of me, a placid, green-water lagoon was enclosed by tall rock walls, the Towers of the Paine (Torre Sur, Torre Centràl, Torre Norte), and all around by other no less beautiful mountains. The glaciers were imposing between one top and the other, as if they were there waiting to dive into the lagoon below, which in fact they did, thanks to dozens of waterfalls that spread from them.

I sat down, sweating like never before, and in solitude I ate the food I had brought, sitting against a rock in the sun. When the weather began to change and get colder, I walked back to the car.

I reached it after three and a half hours, with the sun that accompanied me to the end, and with black and threatening clouds that, behind me, had finally perched on the Towers. Bad luck for those who climbed up there at that moment, I thought, as I went down, greeting with a satisfied smile those who were trudging in the opposite direction, sweating and out of breath.

The strong wind made me the last joke towards the end of the trek, when it opened the backpack and it blew away my sweatshirt, the rain-cover of the backpack itself and my “precious” llama wool gloves, bought in Peru. The gloves were saved by hanging on a bush and I could take them back, but for the other things there was nothing to do. Fuck.

Slowly and tired I returned to Puerto Natales. I dropped off the car and the next day I left for a 20 hours bus trip, heading towards “La Fin del Mundo” (The end of the world), the southernmost city of the planet, the Argentinean Ushuaia.

I was therefore about to leave Chile permanently; I would have returned formally only because of the funny borders of the south of Patagonia but, for this time, it was over here.