During the summer of 2019 I decided – with two friends – to do a short roadtrip, very casual and essential. After wandering around Lombardy, Emilia Romagna, Tuscany, Liguria and Piedmont (in three different roadtrips in 2017 and 2019), this time we decided to go north, leaving Italy. 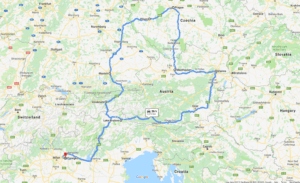 The first stop took us to the Austrian city of Innsbruck, just after the Brenner Pass. A quick stroll in the centre immediately showed us some typical German architecture, with pointed roofs and sharp spiers. In the town we spent just a few hours, doing the slalom among the tourists while, above us, the sun did it among the clouds.

From Innsbruck we headed to Munich (Germany), where we stayed in a hostel not far from the centre and the beautiful Marienplatz, where the enormous building of the town-hall stands out, finely worked. We found a rather clean and tidy city, but we didn’t visit the most important buildings and museums, given the very tight schedule.

However, we gave ourselves a couple of great beers in a typical – and dark – Bavarian pub, 500 years old at least, where the tables were normally shared with other customers. 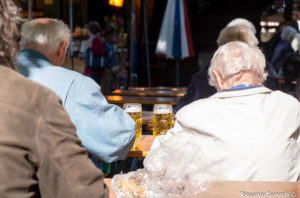 Two elderly Germans with their 10 AM pint.

In Munich there are numerous Gothic and Baroque churches (splendid interior of St John of Nepomuk), with the cathedral and several other churches. There is also an inviting gastronomic market and, not far away, the Hofbräuhaus brewery, where in 1920 Adolf Hitler enunciated the 25 main points of his infamous political party.

The homeland of Pilsner beer

Leaving Monaco, the following day we headed to the Czech Republic, more precisely to the city of Plzeň. That same morning I contacted the ex-girlfriend – Czech – of a friend of mine, who I knew lived in that town. It was no longer like that, but she kindly offered us her help; this consisted in letting us sleep with our sleeping bags in the living room of another friend of her (she asked her first, obviously), who I never met before until that evening.

During the wait we had the chance to walk through the desolated streets of Plzeň, a tidy city with over 200,000 inhabitants but which seemed almost totally deserted, perhaps because it was a Tuesday night. The central square, however, was incredibly beautiful, with the huge Gothic church of St. Bartholomew that towered, dark and sharp, towards the rosy sunset sky. The same square and the streets of the centre were surrounded by pastel-colored houses and silence.

After tasting the typical product of the place – Pilsner Urquell beer – we slept on the Bohemian traveler’s parquet floor, and the following morning we set off again towards Prague.

The Czech capital was the most far city reached during this roadtrip and, in my opinion, also the best one. After checking in at a hostel near the “Old Town”, we immediately set off towards the Malà Strana (Little Quarter) beyond the Charles Bridge – beautiful but super-crowded.

The old city here is all up and down alleys and cobbled streets, made even more annoying by the intense traffic that can go anywhere. We walked up into the enormous Prague Castle complex, which we visited only externally and inside its courtyards and gardens, but not in the buildings: the slow queue for access to the Prague Cathedral snaked all along the wide internal square for more than a hundred meters.

After exploring much of the medieval hill north-west of the city, we chilled out in a park for some time and then we crossed the Moldova river and returned to the Old Town, the most sublime part of the entire Bohemian capital. The huge central square is home to numerous Baroque and Gothic palaces, with the Church of Santa Maria di Týn rising behind another building. Also in the square is the Town Hall Tower, famous for having the interesting Astronomical Clock.

At dinner we returned again beyond the bridge, where in a small local restaurant we had dinner with a typical soup served inside a large hollowed loaf. 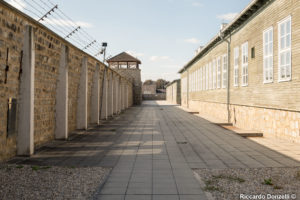 A part of Mauthausen courtyards

The following day we left the beautiful, clean and tidy Czech capital to return to Austria. The stage chosen was Mauthausen, a town on the Danube tragically famous for having hosted one of the largest Nazi death camps, during the Second World War. Entry is free, and an audio guide in your own language costs just € 3. Although I had already been there fifteen years before, the bitter and incredulous feeling in front of those places – now silent and quiet – remained high. The hot and sunny day was at odds with the stories told in the audio guide, and every visitor in the structure seemed to wander disconsolately among the wooden huts and the “cold” concrete rooms.

Leaving the Lager, we walked about thirty miles and planted our tent literally on the southern bank of the Danube. The sunset that we enjoyed was magical and warm and, after the uncomfortable night in the tent, we headed towards Vienna, just named “The most liveable city in the world”.

Also there I had been many years before, but I didn’t remember almost anything. It was nice to see some places with more adult eyes, and to admire those immense squares and avenues surrounded everywhere by the pompous imperial palaces built by the Habsburgs in different styles like Baroque, Gothic, Neoclassical, etc.

Being impossible to visit everything in a day and a half, we opted for a visit to the sublime Austrian National Library (€ 8 for access to the “Magnificent Hall“), and to the immense park of the Schönbrunn Palace. This was the original Habsburgs summer residence  and the main point of interest in Vienna.

With € 8 you can get a daily pass for all public transport (metro, tram, bus), which are essential for moving around in such a large and busy city. Furthermore, in “Park & ​​Ride” parking lots, you can park your car for just € 3.60 a day. Perhaps for the last two reasons Vienna has displaced Melbourne from the ranking of the most liveable cities in the world (I’m joking).

Leaving the Austrian capital we redirected towards Italy, stopping for a brief stop and a quick lunch in the centre of the town of Graz. By chance we came to town during a Folk Festival, which occupied the main square with a huge stage on which an orchestra accompanied several local artists, with hordes of Austrians in Tyrolean clothes who often could leave their beer mugs on the table to applaud the musicians. 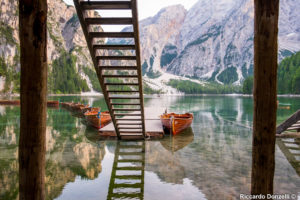 After Graz, the Austrian autobahn gradually became an Italian “autostrada”, which accompanied us in the presence of the massive walls of the Dolomites. We camped in a parking lot in the town of Braies, a few kilometres from the famous alpine lake we reached at sunset and then again the following morning, the last day of travel.

Lake Braies is a small stretch of water almost perpetually calm and flat, surrounded by the granite peaks of the Dolomites and, unfortunately, by hordes of travellers who have recently discovered it thanks to Instagram.

Between 7 and 9 am the crowd is still not there, and you can appreciate the spectacular mountain panorama between one chill of cold and the other. From 9:30 onwards, however, the situation becomes unsustainable, with hundreds and hundreds of tourists disembarking from buses and campers to run to the many rowboats everywhere on the lake. Some of them circumnavigate it on foot along the 3 km path.

After seven days and six nights we then returned to Bergamo, and this 2,200 km roadtrip did cost us less than € 250 each.